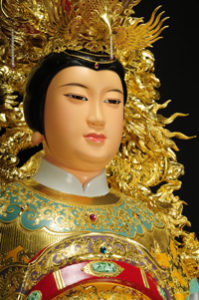 According to the Daoist classics, Golden Mother represents the ultimate Yin energy while King Father of the East (Dongwanggong) is the embodiment of Yang energy. Yin and Yang produce heaven and earth, from which all livings were originated. She is also believed to be one of the Six Ultimates and the name “Golden Mother Primordial Sovereign” indicates she holds a very high position and is highly respected and worshiped. Some legends claim that she is the mother of Jade Emperor (Yuhuang Dadi), but no reference can be found in relevant classics to prove this.

Golden Mother is originally portrayed as a humanoid with tiger’s teeth and the tail of a leopard. She has disheveled hair, wearing ornaments on her head. She is said to be fond of roaring and presides over “the calamities of heaven and the five punishments,” suggesting that she has destructive power to cause epidemics, but she also has the power to avert diseases and cures them. But the Daoists believe that this is a description of an emissary of Golden Mother, rather than Golden Mother herself. Later in the Daoist text, her image becomes a stately, elegant lady, wearing yellow clothing made of multi-colored tabby-weave silk. On her waist, she has a double-bladed sword; on her head, she wears the crown of the Grand Realized Ones. Her shoes are ornamented with squared, phoenix-patterned soles of rose-gem. She looks like in her early twenties. With her celestial appearance, she is depicted as a realized numinous being. In most folklores, legends, fairy stories and novels, her image resembles that of a queen or empress in her twenties or thirties

Golden Mother was granted to be in charge of all the female immortals in Heaven and on Earth, in the Three Realms and Ten Directions. She is the supreme matriarch deity who symbolizes the highest Yin energy and contributes to the creation of the cosmos and the cosmic harmony. Legend has it that she dwells in the cave of the Kunlun Mountains in the far west at the margin of heaven and earth. There is a garden hidden by high clouds where she cultivates the divine peaches that ripen every three thousand years. When the peaches ripens, she would hold a grand party and all deities would be invited to the banquet.

In Daoism, she is a symbol of longevity and the main deity in Golden Register Ritual for Prolonging life. On her birthday, which is celebrated on the third day of the third month in the lunar calendar (but some people hold that it should be on the eighteenth day of the seventh day), Daoists, especially females, gather in temples where celebration rituals are held to pray for health and longevity.

Since the holy spirit of Golden Mother appeared in Ji An Village of Hua Lien County in Taiwan, believers have been found all over the island and the number of followers has grown rapidly. Disciples of Golden Mother are self-disciplined, well coordinated and closely connected as brothers and sisters. The cohesion among them is established and sustained through a common belief in the divinity of Golden Mother and dedication to charity works. In Taiwan, nearly one thousand temples are dedicated to Golden Mother of the Jade Lake, the names of which mostly derive from Tsu Huei Temple, Sheng An Temple, Yao Chi Temple and Wang Mu Temple.